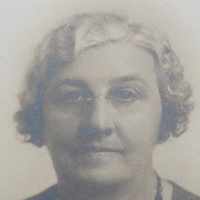 When Isabella Dorinda Coulter was born on 15 May 1875, in Gore, Argenteuil, Quebec, Canada, her father, Henry Sproule Coulter, was 27 and her mother, Rachel Moore, was 21. She married Oscar Lewis McCullough on 20 July 1897, in Morden, Manitoba, Canada. They were the parents of at least 1 son and 1 daughter. She lived in Selkirk, Manitoba, Canada in 1891. She died on 28 May 1958, in Pasadena, Los Angeles, California, United States, at the age of 83, and was buried in Pasadena, Los Angeles, California, United States.

Put your face in a costume from Isabella Dorinda's homelands.

After the explosion of the USS Maine in the Havana Harbor in Cuba, the United States engaged the Spanish in war. The war was fought on two fronts, one in Cuba, which helped gain their independence, and in the Philippines, which helped the US gain another territory for a time.
Scottish and northern Irish: habitational name from Coulter in Lanarkshire or Culter, Aberdeenshire.