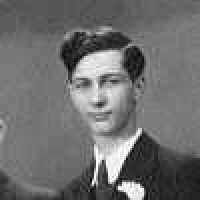 The Life Summary of Orville Jay

Put your face in a costume from Orville Jay's homelands.

During the Chicago race riot, which was raised by racial conflicts throughout Chicago, thirty-eight people died (23 black and 15 white) and over five hundred were injured. It is considered the worst of the approximately 25 riots during the Red Summer and was the worst race riot in Illinois.

English (Devon): occupational name from Middle English, Old English hīne ‘servant, member of a household’, also ‘farm laborer’ (such as a herdsman or shepherd). Originally a collective term for a body of servants, from an Old English plural noun, hīwan ‘household’, in early modern English it commonly acquired excrescent -d (see Hinde ). Evidence from Nottinghamshire shows that some bearers of the name were wealthy freemen, which suggests that their eponymous ancestors were not farmhands but senior members of a lord's household. From the late 15th century onward in western England, from south to north, a hine or hind also denoted a farm steward or manager, a sense that may be relevant to the surname in northwestern England, where hereditary naming had not been fully established by the 16th century.Americanized form of German Hein .