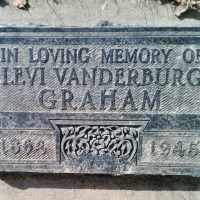 The Life Summary of Levi Vandeberg

When Levi Vandeberg Graham was born on 17 January 1865, in Gore, Argenteuil, Quebec, Canada, his father, William Dawson Graham, was 37 and his mother, Amanda Johnston, was 34. He married Eliza Morrison on 17 March 1889, in Arundel, Les Laurentides, Quebec, Canada. They were the parents of at least 3 sons and 1 daughter. He lived in Argenteuil, Quebec, Canada for about 10 years. He died on 2 June 1945, at the age of 80, and was buried in Swift Current, Swift Current No. 137, Saskatchewan, Canada.

Put your face in a costume from Levi Vandeberg's homelands.