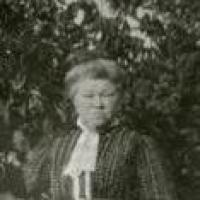 When Elizabeth Guild was born about 12 August 1847, in Leeds and Grenville, Ontario, Canada, her father, Hermon Guild, was 45 and her mother, Abigail Camp Polly, was 42. She married William B. Reed about 1867, in Leeds and Grenville, Ontario, Canada. They were the parents of at least 4 sons and 4 daughters. She lived in Forester, Sanilac, Michigan, United States in 1880 and Red Deer, Red Deer County, Alberta, Canada in 1911. She died on 24 January 1925, in Alberta, Canada, at the age of 77, and was buried in Peachland, British Columbia, Canada.

Scottish (Angus and Perthshire): apparently a nickname for someone who played a prominent part in a medieval guild. It may, however, be a Scottish variant of Gould .