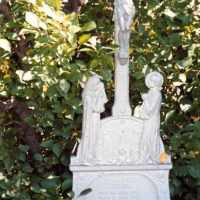 German:derivative of any of several ancient Germanic personal names, most probably one formed with diot ‘people, race’, although there are several other possibilities.from Middle High German doste, toste ‘leafy branch, bush’, either a topographic or habitational name referring to a house bearing a sign depicting a bush or perhaps a topographic name for someone living near bushes or brush.