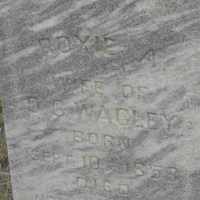 Put your face in a costume from Roxa Anna "Roxie"'s homelands.

Congress restored Texas to the Union on March 30, 1870, despite not yet meeting all of the requirements established for re-admittance.
Irish: reduced form of McNeely .