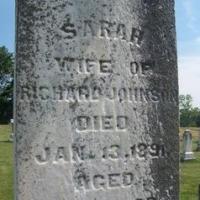 The Life Summary of Sara

Put your face in a costume from Sara's homelands.

History Of Richard Johnson Given By Mark Johnson

RICHARD JOHNSON deceased, was born in Bucks County, Penn., October 4, 1801. He was a son of NATHANIEL JOHNSON and was reared in Pennsylvania. He was a practical farmer and miller, and was married Marc …