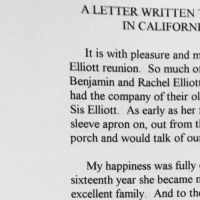 The Massive Internal Improvements Act of 1836 loaned Indiana $10,000,000 to create infrastructure such as canals, railroads, and roads across the state. The act was signed by Whig Governor Noah Noble and passed by the Indiana General Assembly. However, the financial crisis known as the Panic of 1837 thwarted these plans as costs ballooned. Construction on the infrastructure was not completed and the state debt rapidly increased.
English: variant spelling of Hickson .