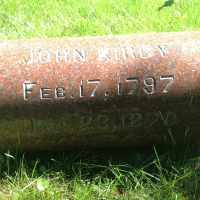 When John Kirby was born on 17 February 1797, in Kirkbymoorside, Yorkshire, England, his father, John Kirby, was 26 and his mother, Isabell Foster, was 22. He married Mary Fuller before 1829, in England, United Kingdom. They were the parents of at least 1 daughter. He died on 23 January 1870, in Tomah, Monroe, Wisconsin, United States, at the age of 72, and was buried in Oak Grove Cemetery, Tomah, Monroe, Wisconsin, United States.