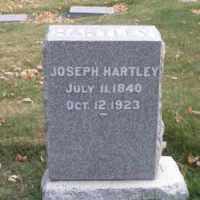 The Life Summary of Joseph Hamilton

Put your face in a costume from Joseph Hamilton's homelands.

(1997: 11654;2007: 23460; 2010: 31221)English (Lancashire and Yorkshire): habitational name, in northern England mainly from Hartley in Rochdale parish (Lancashire) but also from any of the places called Hartley in Westmorland and the West Yorkshire. In southern England it derives Hartley in Devon, Hampshire, and Kent, and from Hartleigh in Devon. Similar placenames occur in Berkshire, Dorset, and Northumberland, but it is not known if they gave rise to surnames. Most of the placenames derive from Old English heorot ‘hart, stag’ + lēah ‘woodland clearing’, though the Westmorland placename comes from Old English heard ‘hard’ + clā ‘claw, tongue of land’, and the Northumberland placename derives from Old English heorot + hlāw ‘mound, hill’.Irish: shortened Anglicized form of Gaelic Ó hArtghaile ‘descendant of Artghal’, a personal name composed of the elements Art ‘bear’ or ‘hero’ + gal ‘valor’.