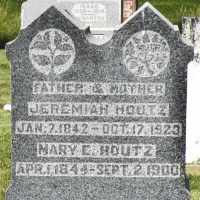 Abraham Lincoln is assassinated by John Wilkes Booth.
German:1. Probably an altered spelling of Hautz , an argot word (thieves’ slang) in Bavaria and Austria for a peasant farmer. 2. from a short form of a Germanic personal name composed with hug ‘mind’ ( see Hugo ).