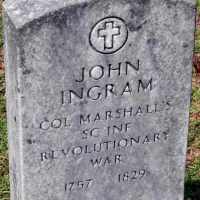 The Life Summary of John Littleton

Put your face in a costume from John Littleton's homelands.

Georgia is the 4th state.

According to membership application by James Robert Ingram into Texas Society of the Sons of the American Revolution: John Ingram was a private soldier in Captain John Putman's Company, Col. Thomas B …