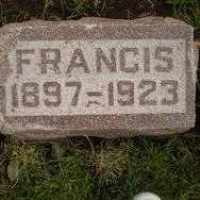 Put your face in a costume from Donald Francis Thomas's homelands.

St. Louis, Missouri, United States hosts Summer Olympic Games.
(1997: 46903;2007: 98709; 2010: 135718)Scottish: habitational name from the province of Cunningham in Ayrshire, first recorded in 1153 in the form Cunegan, a Celtic name of uncertain origin. The spellings in -ham, first recorded in 1180, and in -ynghame, first recorded in 1227, represent a gradual assimilation to the English placename element -ingham.Irish: surname adopted from Gaelic Ó Cuinneagáin ‘descendant of Cuinneagán’, a personal name from a double diminutive of the Old Irish personal name Conn meaning ‘leader, chief’. This name is also adopted for Ó Connacháin, a variant of Ó Connagáin ‘descendant of Connagán’, from a diminutive of the personal name Conn.