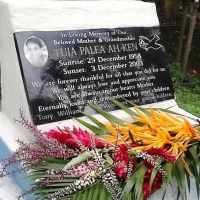 Put your face in a costume from Tuia's homelands.

Western Samoa becomes independent, the first Pacific island nation to do so.

There are no historical documents attached to Tuia.