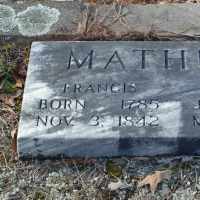 The Life Summary of Francis Lafayette

Put your face in a costume from Francis Lafayette's homelands.

As Georgia had been weakened during the Revolutionary War, it was unable to defend its Yazoo lands, or land west of the Yazoo River. Thirty-five million acres were sold to four companies for $500,000 as Governor George Mathews signed the Yazoo Act on January 7, 1795. Angry Georgians protested in the streets as they felt bribery and corruption were involved and the sale was far below market value. The legislation tried to rescind the Yazoo Act, but much of the land had been sold to third parties. The issue made its way to the United States Supreme Court and it was determined that rescinding the law was an unconstitutional infringement on a legal contract. The government took full possession of the territory by 1814 and awarded its claimants over $4,000,000.

(1997: 18304;2007: 38190; 2010: 51592)English: patronymic from Mathew ; a variant of Matthews . In North America, this surname has absorbed various cognates from other languages.History: Among the earliest bearers of the name in North America was Samuel Mathews (c. 1600–c. 1657), who came to VA from London c. 1618. He established a plantation at the mouth of the Warwick River, which was at first called Mathews Manor; later its name was changed to Denbigh. He was one of the most powerful and influential men in the early affairs of the colony. He (or possibly his son, who bore the same name) was governor of the colony from 1657 until his death in 1660.