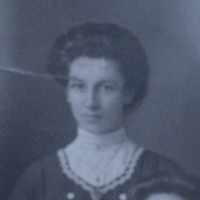 When Julia Olshaski was born on 23 June 1895, in Lethbridge, Alberta, Canada, her father, Michael Olshafski, was 42 and her mother, Anna Sophie Zuback, was 39. She married Andrew Michael Evans on 27 October 1913. They were the parents of at least 2 sons and 1 daughter. She lived in Alberta, Northwest Territories, Canada in 1901. She died on 8 August 1977, in Lethbridge, Alberta, Canada, at the age of 82, and was buried in Kimberley, British Columbia, Canada.

Feminine form of the old Roman family name Julius . A woman called Julia is mentioned in Paul's Epistle to the Romans (Romans 16:15), and the name was borne by numerous early saints. Its frequency increased with the vogue for classical names in the 18th century, and it continues to enjoy considerable popularity, although the recent introduction of Julie to the English-speaking world has reduced this somewhat. Well-known bearers include the British actress Julia Foster ( b. 1941 ) and American actress Julia Roberts ( b. 1967 as Julie Fiona Roberts ).