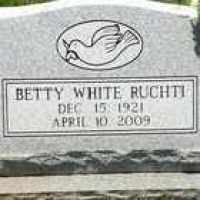 The Life Summary of Betty Lou

Put your face in a costume from Betty Lou's homelands.

(1997: 217049;2007: 471623; 2010: 660491)English: from Middle English white, wit (Old English hwīt ‘white’), hence a nickname for someone with white hair or a pale complexion. In some cases it is perhaps from a Middle English survival of the Old English personal name Hwīta, a short form of names in Hwīt- (from hwīt ‘white’). The name may also be topographic, referring to someone who lived by a bend or curve in a river or road (from Old English wiht ‘bend’), the source of the placename of Great Whyte in Ramsey, Huntingdonshire (compare Wight ). This name is also a variant of Wight . The surname White is also very common among African Americans.Irish and Scottish: adopted for any of several Irish and Scottish Gaelic names based on bán ‘white, fair’ (see Bain 1, McElwain ) or fionn ‘fair’ (see Finn 1). The English surname has been Gaelicized in Ireland as de Faoite.