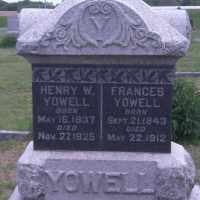 The Life Summary of Henry Wagner

Put your face in a costume from Henry Wagner's homelands.

variant of Youle (compare Yule ), a nickname from Middle English yole ‘Yule, Christmas’ (Old English geōl, Old Norse jól), a nickname for one born at that time.variant of Ewell with prosthetic Y-.English: