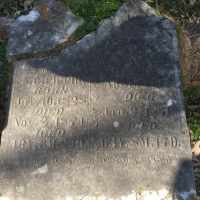 Allison G Pippin was born on 15 April 1812, in North Carolina, United States as the son of Banister Pippin. He married Caroline Winny Pippin in 1842, in Alabama, United States. They were the parents of at least 2 sons and 3 daughters. He died on 2 January 1876, at the age of 63, and was buried in Carlock Cemetery, Hamburg, Ashley, Arkansas, United States.

Put your face in a costume from Allison G's homelands.

Being a second spiritual and religious awakening, like the First Great Awakening, many Churches began to spring up from other denominations. Many people began to rapidly join the Baptist and Methodist congregations. Many converts to these religions believed that the Awakening was the precursor of a new millennial age.
1 English: from the old personal name Pippin, either a pet form of Philip or a variant of Old French Pepin .2 German: from an Old Prussian personal name, Pippin.