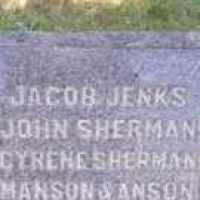 The Revolutionary War ended with the signing of the Treaty of Paris which gave the new nation boundries on which they could expand and trade with other countries without any problems.
(1997: 2905;2007: 5493; 2010: 7396)English (West Midlands): from the Middle English personal name Jenke (a shortening of the personal name Jenkin, Jankin; see Jenkin ), with genitival or post-medieval excrescent -s.History: Joseph Jenks (1602–83), the descendant of an old Welsh family, was born in England and traveled to Saugus, near Lynn, MA, in 1642 to assist in the development of America's first iron works. His son, Joseph Jenckes (sic), followed in 1650, founded Pawtucket, RI, and raised four sons who held places of respect and distinction in RI, including one who served as governor for five years.