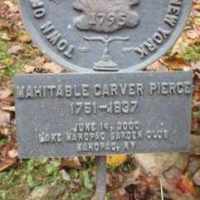 The Life Summary of Mahitable

Put your face in a costume from Mahitable's homelands.

English: occupational name from Middle English kerver ‘one who cuts or carves (something)’, especially wood, hence ‘carpenter’ but within that trade more specifically and commonly ‘sculptor of wooden images’; perhaps occasionally ‘sculptor in stone’.Americanized form of German Garber , Gerber , or Körber (see Koerber ).History: John Carver (c. 1576–1621), one of the Mayflower Pilgrims, was the first governor of Plymouth Plantation. He was born in Nottinghamshire or Derbyshire, England. Emigrating to the Netherlands in 1609, he joined the Pilgrims at Leyden.