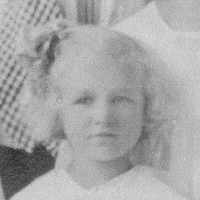 When Mary Beatrice Crandall was born on 8 December 1910, in Idaho Falls, Bonneville, Idaho, United States, her father, James Kearney Crandall, was 47 and her mother, Minnie Francis Thankful Smith, was 33. She married Merton Bud Lawson on 6 June 1930, in Sterling, Logan, Colorado, United States. They were the parents of at least 1 son and 1 daughter. She died on 29 March 1996, at the age of 85.

Put your face in a costume from Mary Beatrice's homelands.