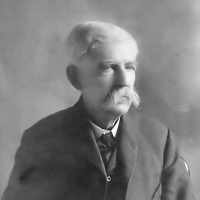 Put your face in a costume from John Downing's homelands.

William Rand opened a small printing shop in Chicago. Doing most of the work himself for the first two years he decided to hire some help. Rand Hired Andrew McNally, an Irish Immigrant, to work in his shop. After doing business with the Chicago Tribune, Rand and McNally were hired to run the Tribune's entire printing operation. Years later, Rand and McNally established Rand McNally & Co after purchasing the Tribune's printing business. They focused mainly on printing tickets, complete railroad guides and timetables for the booming railroad industry around the city. What made the company successful was the detailed maps of roadways, along with directions to certain places. Rand McNally was the first major map publisher to embrace a system of numbered highways and erected many of the roadside highway signs that have been adopted by state and federal highway authorities. The company is still making and updating the world maps that are looked at every day.
(1997: 105393;2007: 237595; 2010: 332423)English and Welsh: variant of Edward , with genitival or post-medieval excrescent -s. This surname is also very common among African Americans.History: One of the earliest American bearers of this very common English surname was William Edwards, the son of Rev. Richard Edwards, a London clergyman in the age of Elizabeth I, who came to New England c. 1640. His descendant Jonathan (1703–58), of East Windsor, CT, was a prominent Congregational clergyman whose New England theology led to the first Great Awakening, a great religious revival.