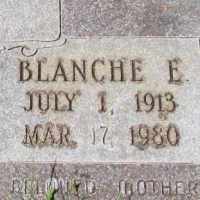 The Life Summary of Blanche Ellen

Put your face in a costume from Blanche Ellen's homelands.

(1997: 6170;2007: 12808; 2010: 17300)English:occupational name from Middle English strenger, stringer ‘man who worked at a string-hearth or furnace’, synonymous with Stringfellow . The name occurs frequently in districts where iron was smelted in medieval times.